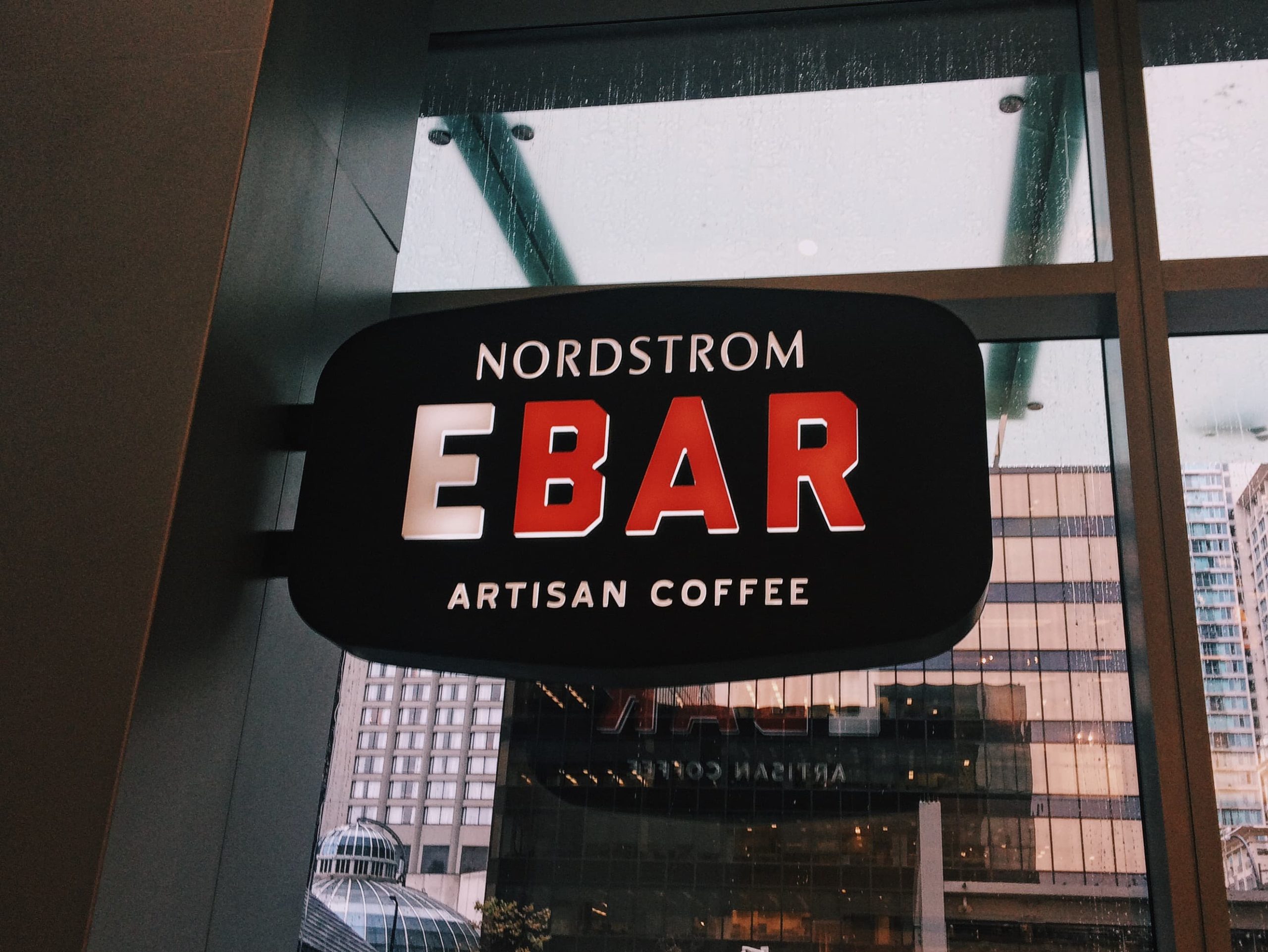 Not as bad as a Starbucks, better than a Blenz, but not nearly as good as an independent coffee shop, Nordstrom EBar makes a halfway decent attempt at serving various types of coffees and teas, as well as a really decent selection of food and snacks. Ultimately, if you’re looking for a really great coffee there are better places within a few blocks (such as Bel Cafe).

12oz Latte – $4.05
From what I could tell, they roast their own espresso beans, which resulted in an overly burned taste to the latte. However, that could have been due to the over extracted shot of espresso, which made the latte very strong and bitter. The milk was also a bit of a disaster. I watched the barista use a dirty pitcher and steam wand to heat it for way too long, which meant was catastrophically scalded, sour and lacking any sweetness at all.
The one saving grace here is that the other barista behind the counter, seemed to be pouring much more skillfully, so this could have just been bad luck with the employee I dealt with.

Chicken Caesar Wrap – $8.75
Taste wise the wrap was delicious. The saltiness of the anchovies may be a bit for some, but I’m in the “there’s no such thing as too many anchovies” camp! The ratio of sauce to cheese to chicken to salad was perfect.
Where this wrap fell down, however, was a) the overall portion size, which was way too small for it’s price tag and b) the presentation, which was lackluster at best. If they fixed those two options it would be a spectacular lunch item.

Alongside the wrap there were various pre-packaged sandwiches and salads, as well as donuts from Cartems, pastries from Terra Breads and To Die For Fine Foods lemon loaf and banana bread.

It’s in the very heart of downtown, on Granville between Robson and Georgia streets. There’s about a million buses that stop there, a skytrain station you can see out of the window and parking under the building.

It’s nice, it’s clean but it’s generic. There’s nothing amazing about the venue, but I have no complaints either; white walls, wooden table tops. Enough seating for plenty of people, with a communal table.

An absolute bloody nightmare to find, but once I’d hacked my way through the throngs of overly made up Vancouver housewives in the cosmetics department of Nordstroms it ended up being a nice sized, clean and well appointed bathroom.

Really friendly, helpful and cheery! All the questions I asked were answered clearly and succinctly, with a big smile.