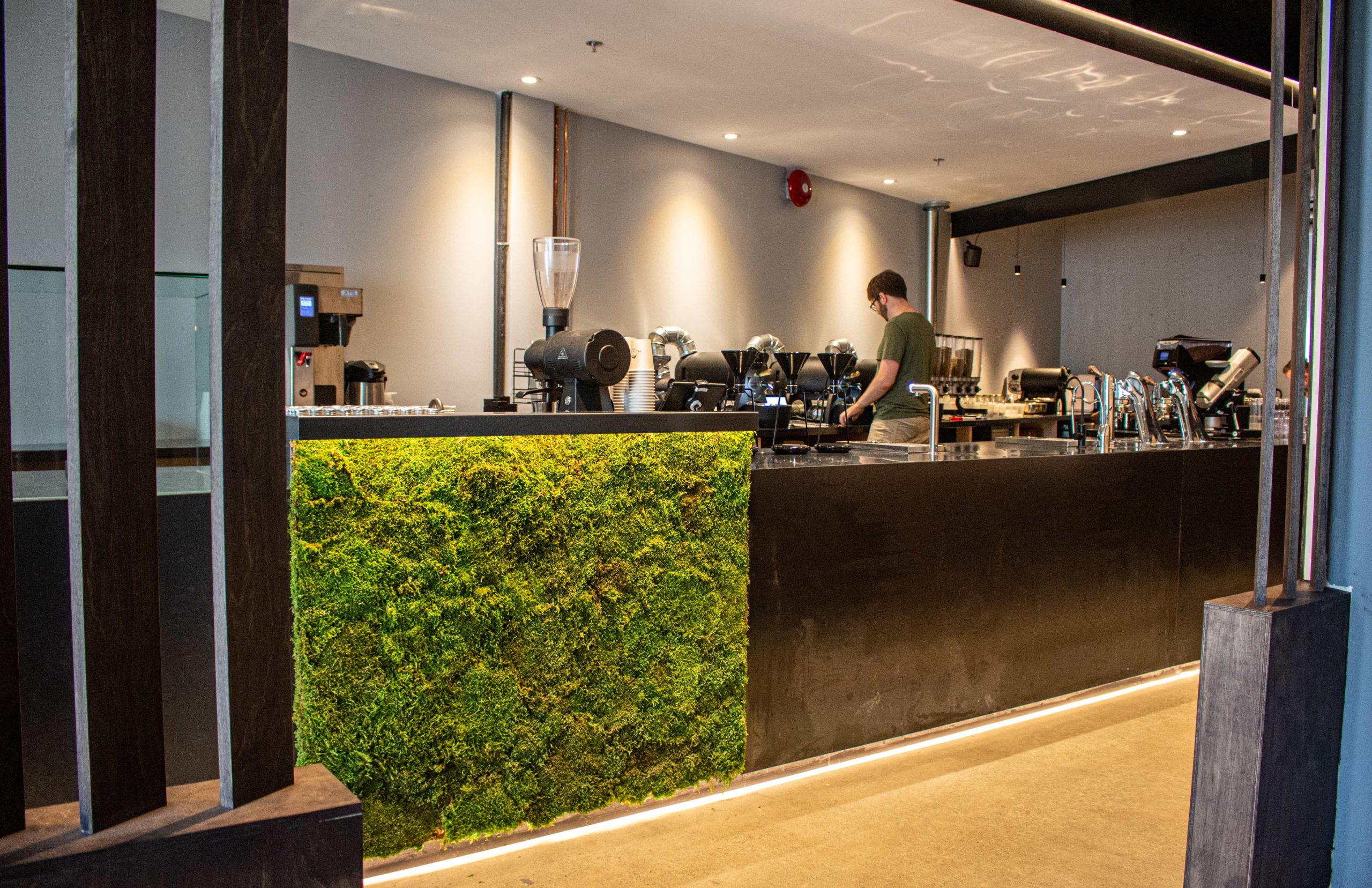 A year or two back I interviewed a guy called Matt. He’d just started a nano-roastery and was selling his beans in a select few shops around town as well as online on his website. His efforts were widely considered to be some of the best small-batch coffee you could get in Vancouver. This meant he started winning awards, such as best coffee at this years Hopwired Festival. As you can imagine, I was pretty excited to hear that he was working on a coffee shop.

Well, the time has arrived. Prototype now has a roof… and walls… and slats… and angled counters… and toys… SO MANY TOYS.

Vancouver’s coffee scene just got the single biggest game-changing upgrade to its cafe lineup. And I promise you, it’s going blow your fucking mind.

OK, buckle up because this part is going to be massive. The coffee program at Prototype is the most bonkers thing you’ve ever heard of. Firstly, every visit I’ve seen 12-14 different coffee choices on their menu. Yes, you read that correctly. 12-14. What’s that? The biggest coffee lineup in the city doesn’t impress you? Well, my overly picky friend, what if I told you that you could choose to buy bags of those coffees as well as drink them in-house? Still not interested? Well, fuck it, what if I told you that when you buy said coffee you can have it roasted to order while you wait, on their lineup of Bullet R1 roasters?

Yeah, that’s what I thought. Pretty exciting huh? You can put your pants back on whenever you’re done. 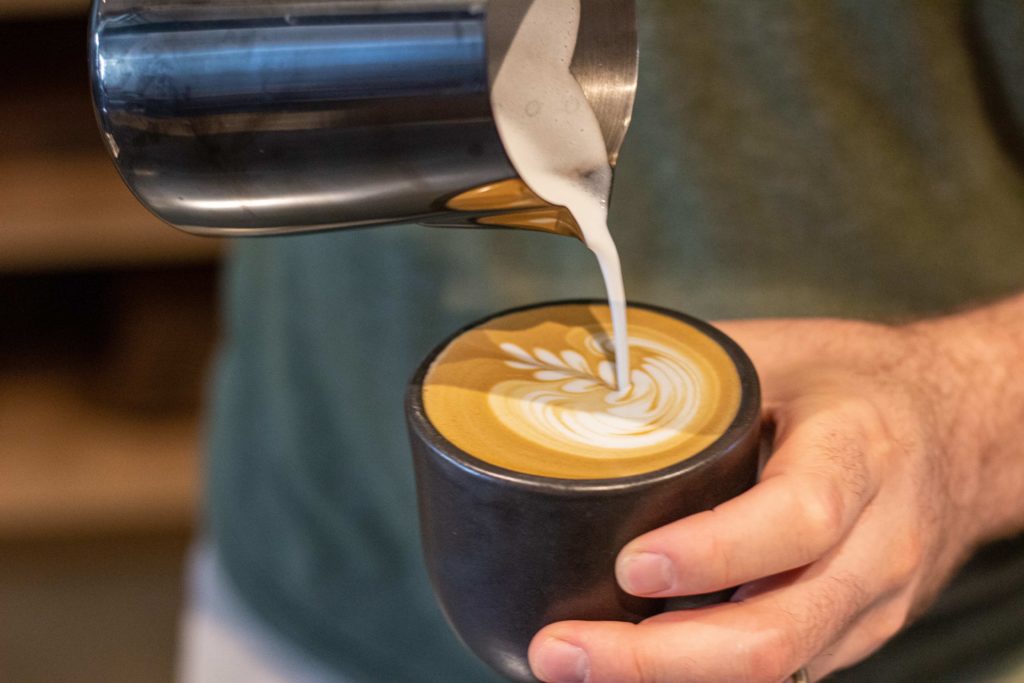 Before we talk taste, let me first point out that Prototype has foregone the usual bulky espresso machine in favour of a Modbar. This means you get a huge view of everything going on behind the bar, as you watch your barista work their magic. It’s a beautiful piece of equipment that we’re almost certainly going to see pop up more and more in coffee shops across the city.

The drink itself was outstanding. The milk was perfectly steamed, the espresso had some bright fruit notes that burst through the luxurious milk. The balanced aftertaste was of intense darker honey flavours.

They also have an absolutely stunning couple of grinders. They opted for the Mythos II grinder for their regular espresso and the EG1 grinder for their fancy stuff. The EG1, which looks like a telescope made sweet, sweet love to Optimus Prime. It’s stunning to see in person. 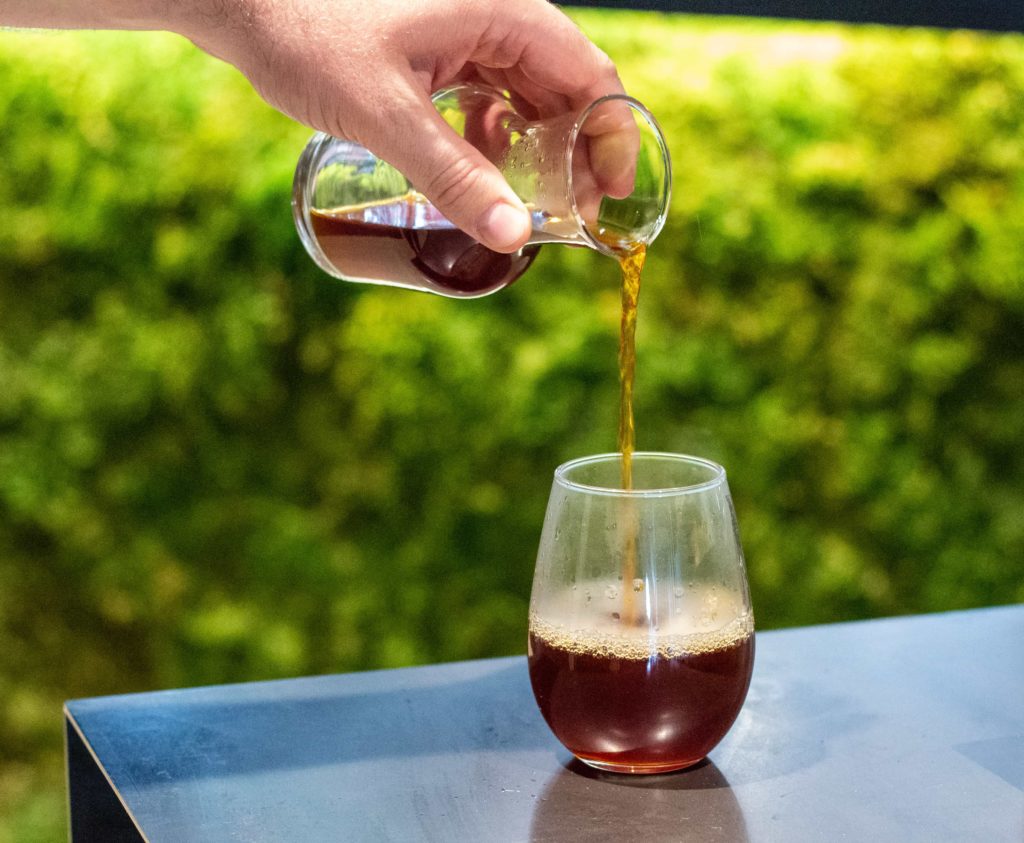 Prototype Coffee has opted to use Gina brewers from the hilariously named Goat Story. These are immersion drippers so they’re kind of like a cross between a regular v60 style setup and a clever dripper.

My coffee was quite simply outstanding. Intense blueberry and blackberry notes, very tea-like in its body and an expertly balanced acidity to the whole thing. I thoroughly enjoyed every second of this coffee.

Apart from all of these coffees being incredible (more on that in a sec), this was a tremendously fun way to approach cold brew. You choose four from their massive selection and the staff serve them up to you in tiny glasses on a tiered, rotating platform.

OK, the coffee. The PNG’s were great – the washed was clean and bright, the honey processed rich and sweet. The Ecuadorian was a solid easy drinker. However, they were all blown out of the water by the Brazillian bean. Holy crap was this ever good. It was the most interesting cold brew coffee I’ve ever had in my life.  Massive notes of Whiskey and fermented sugars. Almost like a cross between an Irish Whiskey and a sipping rum like Diplomatico. It was an absolute revelation and I cannot begin to tell you how this has changed my view on cold brew.

The review continues in a sec, but I wanted to quickly tell you about an app I’ve been working on for the last year that I’m pretty stoked about. It’s called Siply and the idea is to curate and promote the best coffee shops in Vancouver and then save you a little cash on your drinks. Have a play with the calculator below to see what I mean about savings.

An aspect of Prototype Coffee that sets them apart from everyone else, is that you can have them roast a bag of coffee to order. They have three sexy Bullet R1 roasters on the counter behind the espresso machine, alongside huge containers of green coffee. 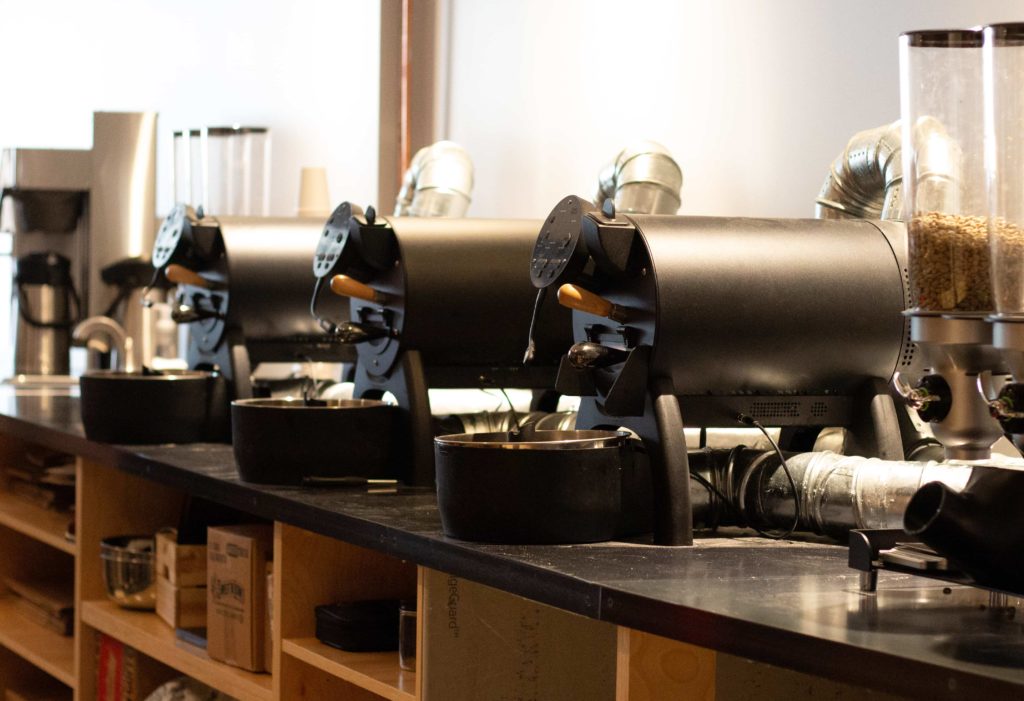 You choose your bean then wait for 15ish minutes as they roast the coffee for you. It’s a remarkable and unique idea (OK mostly unique, I know that Connected Minds has been doing this for a while).

This leads itself into an interesting subtopic of “how long should you leave your coffee after roasting until you brew it”. I’m not going to get into that minefield here though.

Prototype carries a stock selection of pastries and sweets and at the time of writing, they have a popup from Ritchies Bakery on Thursdays and Saturdays. I ate on the popup days. 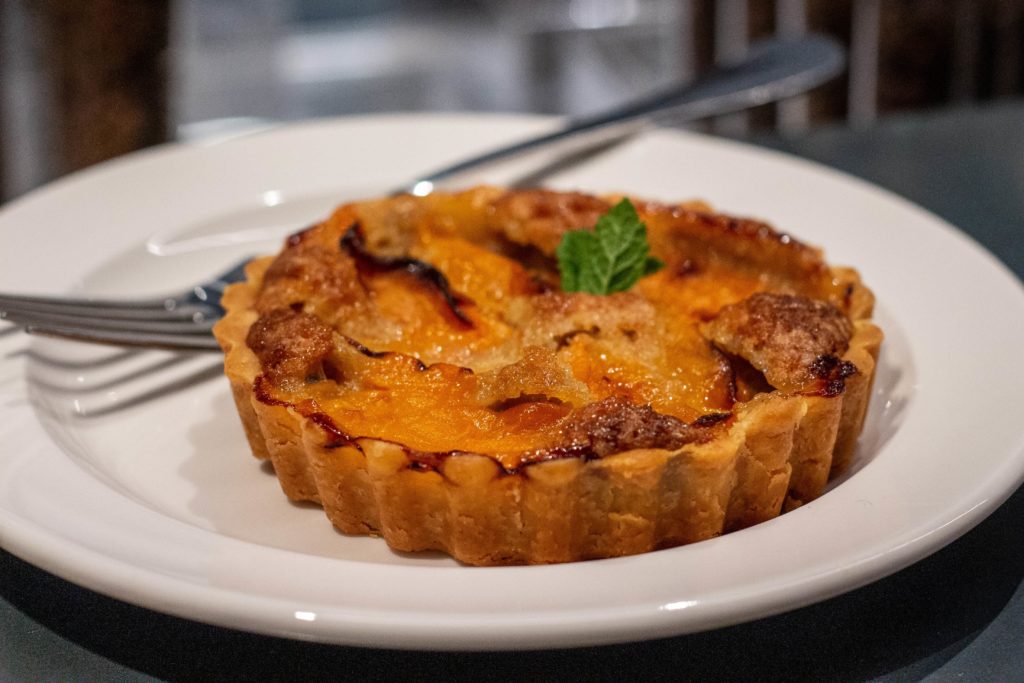 Sweet baby Jebus this was good. The pastry was buttery and flaky, the walnutty stuff inside was luxurious and smooth and the Apricots were a zingy, punchy palate tantalizer! All the flavours worked perfectly together and the tiny sprig of mint made me feel all sorts of fancy. My only grumble is that I could have eaten one of these the size of a dinner plate, easily. Probably best that I got the last one, really. 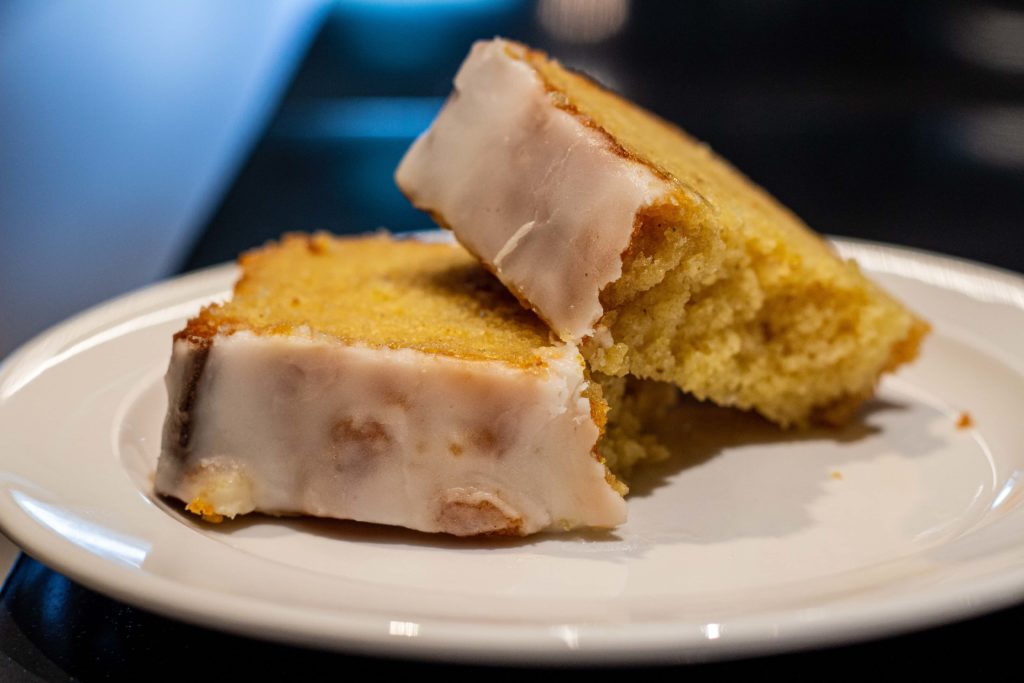 Another killer piece of food. The lemonyness was expertly balanced with the soft and moistyness™ of the loaf. What really impressed me, is despite there being a very obvious brown edge to the loaf, the thing was the same level of soft all the way through. I’ve literally never had this in any type of loaf I think I’ve ever had. Very impressive!

Honestly, at this point, I’d say “who cares about the staff, just go for the coffee even if you get punched in the face”, but thankfully I have great things to report back on. We’ll ignore Matt for this part, as he’s a well-known face around town and quite honestly we’re all sick of hearing about how much of a nice bloke he is!

Instead, I’ll talk about Megan who chatted to me about how happy she was to be serving up my drink, even though I was poking a camera in her face! Or let’s talk about Alice who maintains that she likes to hear “That is the best XYZ that I’ve ever had”, minimum once a day, inside the shop. Or let’s talk about Rommy who smiled nicely, with slight panic in his eyes when I rambled on about how the drink was delicious in a completely incoherent sentence. He handled a classic “WTF VCS” moment like the best of them!

Seriously though, the staff are the dogs danglies (English phrase, look it up). They treat you like you’re their first-ever customer, each time. They know their products inside out (which is nuts because remember, there are 14 coffees) and most of all they’re clearly having a blast working there.

I want my house to look like this. Nuff said, on to the next section.

OK, if you must be so needy I’ll tell you all about it. They enlisted the help of Bill Uhruich who helped build Timbertrain, Birds and Beets and Nero Waffle Bar. They’ve gone for a darker, moodier colour tone throughout the shop, with sharp angles for the bar, living walls covered in moss and darker shades of wood throughout. 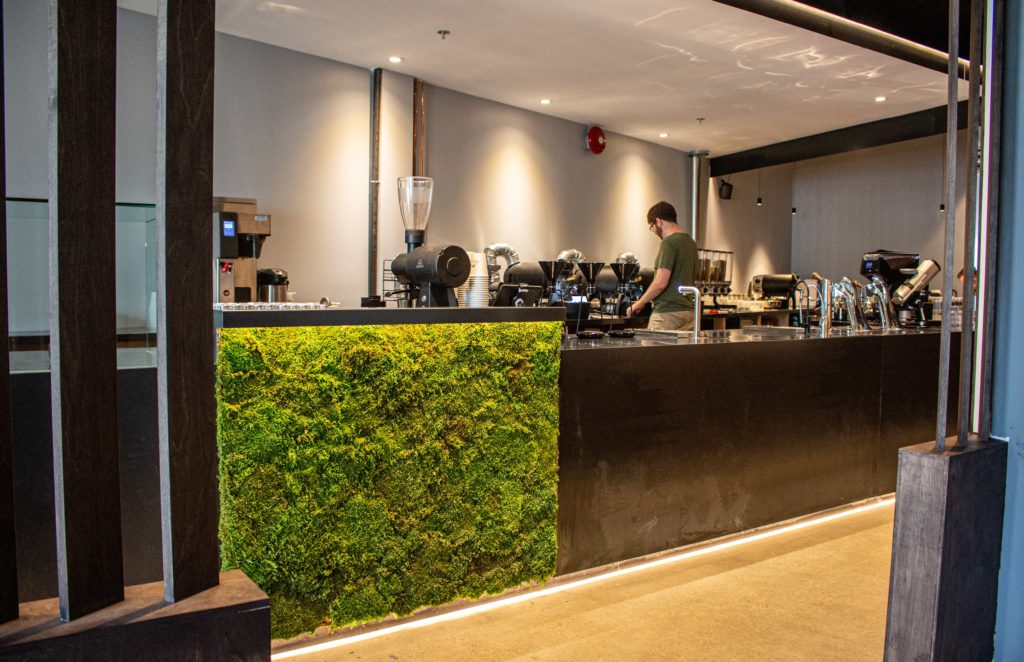 There’s a huge bar area that’s set up to guide customers through the visual experience that is Prototype. As I mentioned earlier, you won’t find a usual bulky espresso machine here, which means that your field of vision is open to seeing the whole venue.  This is a good thing because there are a lot of fun coffee toys behind the bar! I’d encourage you to chat to the baristas about them because they’re clearly loving the fact that they get to work with them all.

As you progress through the room you have two options. Head to the end and sit at one of the 8 person bar seats or double back to their super-secret sneaky seating section, that houses a handful of bench tables. OK it’s not that sneaky, I just like alliteration. 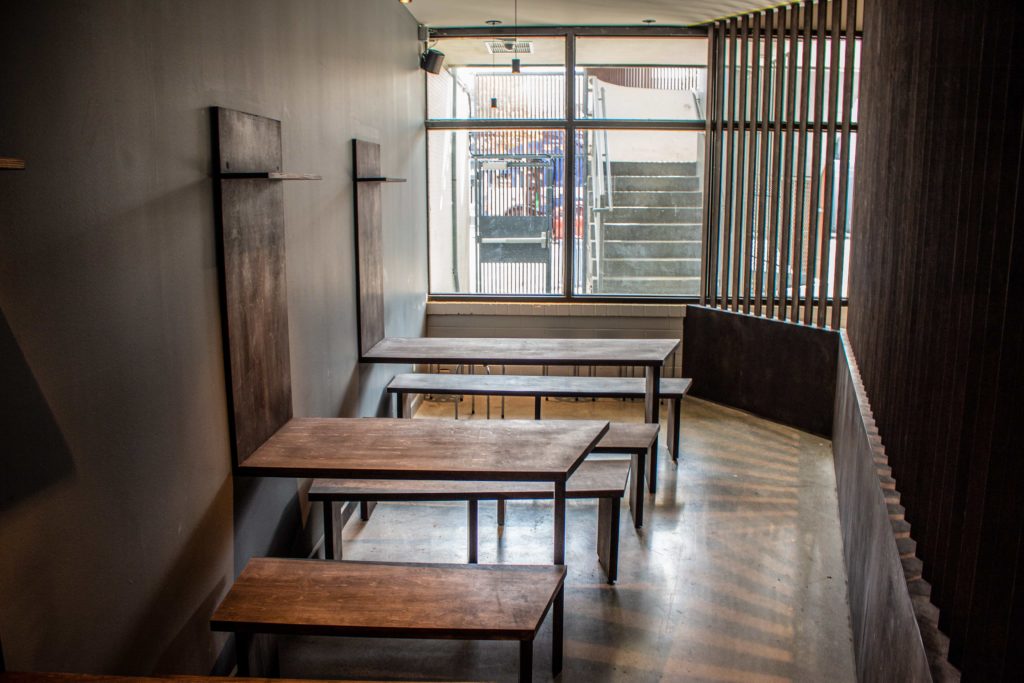 I know what you’re probably thinking and YES, I did almost get Prototype tattooed on my bottom… BUT… not everything about this new shop is the be-all and end-all. Strathcona is a funny place – it’s easily accessible on the bus but Skytrains are a long way off. There’s lots of great, free, on-street parking as well as some side road parking. You’re also really close to the breweries of Yeast Vancouver, which is a major plus. However, I’d be crucified by you all if I didn’t mention the one thing that Prototype is missing, that a lot of other shops have. 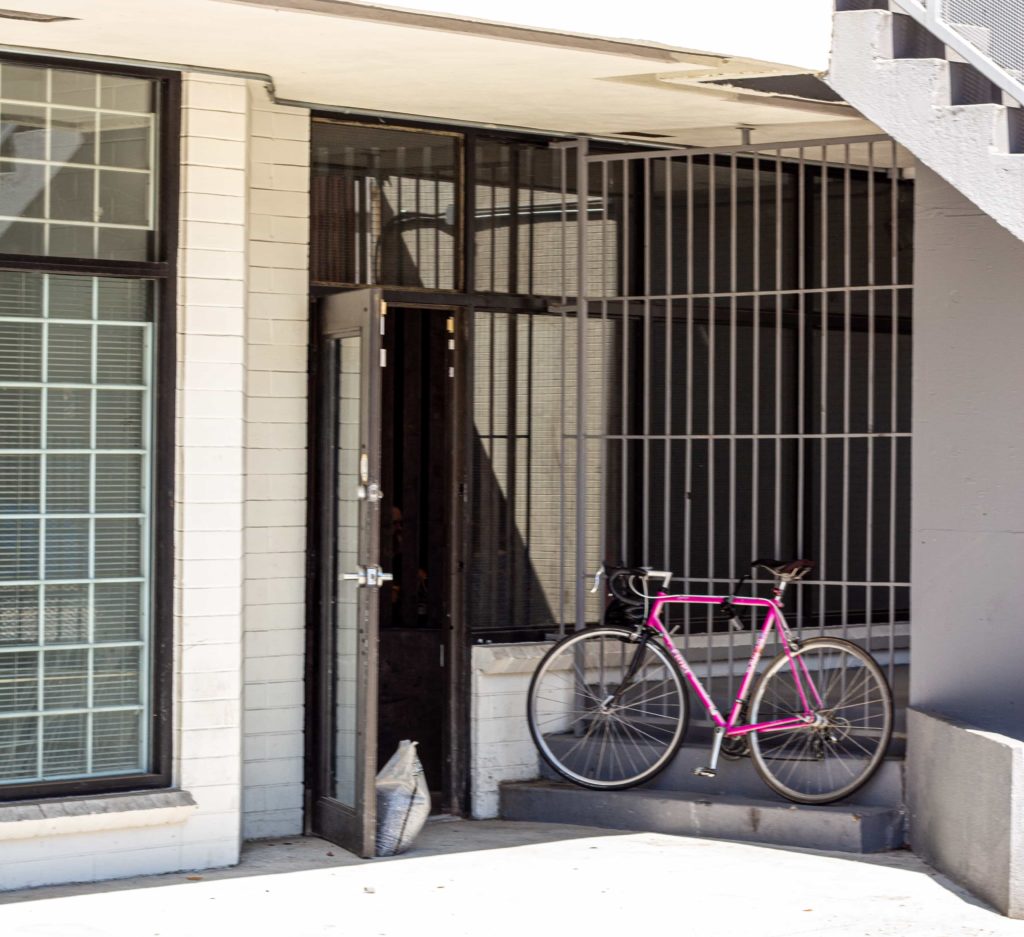 Now, this isn’t necessarily a bad thing. I predict that they’re going to do just fine without an obvious street presence. Plus they’ve been given the green light on a mural outside on the wall. But if I was them, that mural would be made out of fireworks, because being tucked under the stairs means you’re already on the defence with foot traffic. So my score has to reflect that.

Two bathrooms, nicely appointed, not really much else to say, to be honest! They’re squeaky clean and that’s the main thing.

Prototype Coffee is honestly a game-changer for the Vancouver coffee scene. The drinks you’ll have here will almost certainly blow your mind each time. They’re innovating by roasting to order and with their massive selection of hot and cold coffees. Sure they are harder to find, but here’s my prediction though: Prototype doesn’t need a front door. They’re going to become a Vancouver “hidden gem” that newbies and tourists come to the city to seek out. And hey, if these visitors struggle to find the place and accidentally walk through the wrong front door, at least they’re in Strathcona where they will almost certainly get an entertaining look at a naked man on a sofa smoking weed.