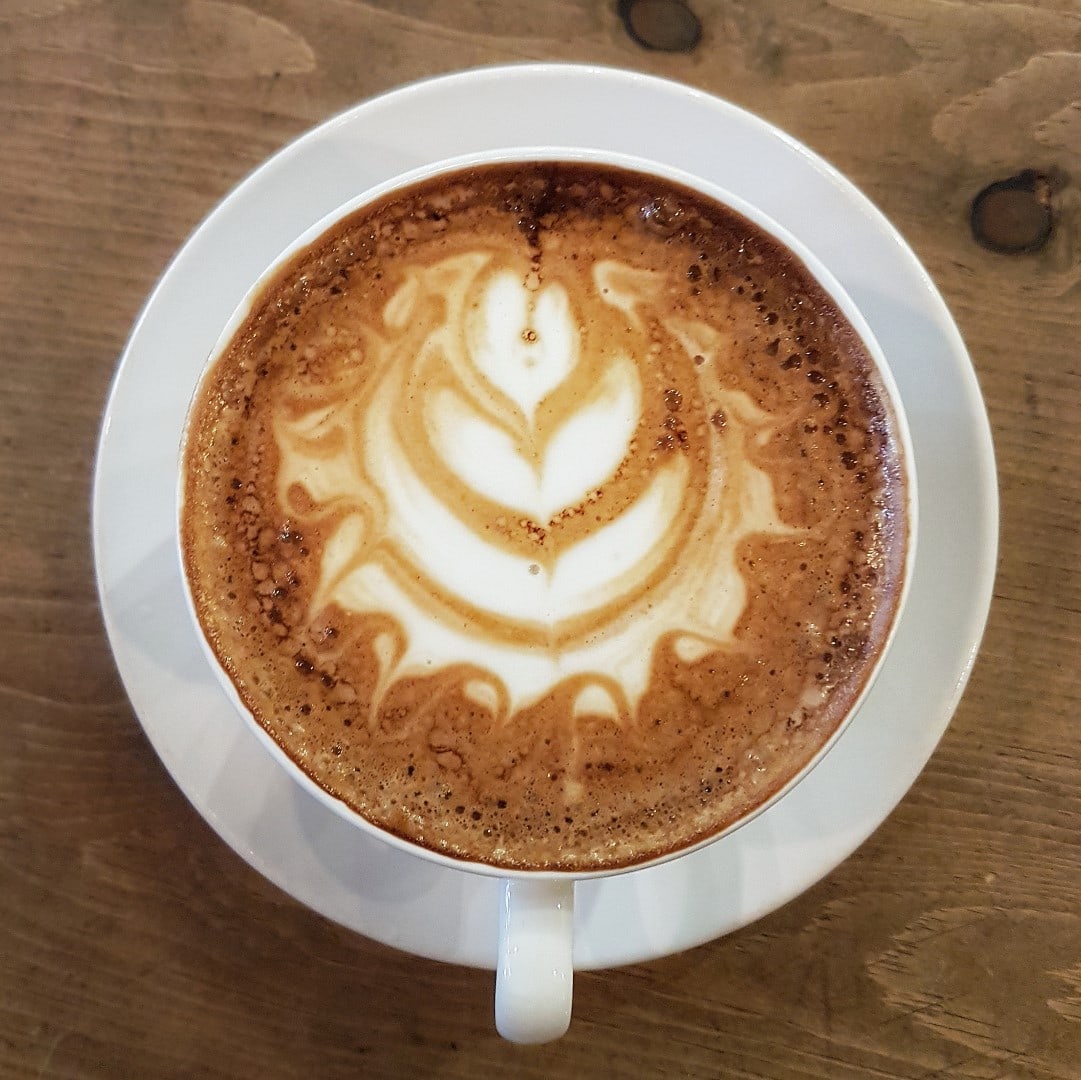 Whilst out for a summerly walk in Kits, I turned to Mrs VancouverCoffeeSnob and said “What’s that up there, is it a cafe in a house?”. It was hard to see, as we were so far away but when we got within a few blocks we realised it was! It was a charming looking cafe that could have passed as your typical older Kitsilano wooden residence. ‘How wonderful’ we thought as we got closer. A block away I said, “Looks like it needs a lick of paint”. Half a block closer I realised it needed a couple of licks of paint. When we got to the door it dawned on me that the paint was probably the only thing holding it together. Welcome to Arbutus Coffee, 1970’s premium neighborhood cafe that time forgot.

12oz Latte – $4.05
Visually this drink was was great – there was some whirly art stuff going on (which is kind of cheating as it was done with a stick) but it was dumped on the counter, spilling it all over the saucer. It’s a testament to their espresso machine steam wand because I didn’t think you could actually get milk that hot without it spontaneously combusting. Never the less, they managed to do it and I had to wait about 20 minutes for it to cool down. The espresso to milk ratio was good, but the beans (from local roaster Bean Around the World) were very dark roast, leaving a bitter taste to the whole thing, that was only made worse by the scalded milk. The beans appear to all be stored in unsealed bins on the shelf, so my guess is they were a bit stale.

A true miracle of science – the chicken was both watery tasting but dry as a bone! The balance of flavours in the whole thing was a disaster – everything tasted of garlic. I resigned myself to Mrs VancouverCoffeeSnob keeping me at arms length for a couple of days and tried to power through, but it wasn’t worth finishing. At one point I attempted to counteract the dryness of the whole thing by drinking it with my latte, but the coffee was the temperature of the sun, so I decided to spare myself the 3rd degree burns. 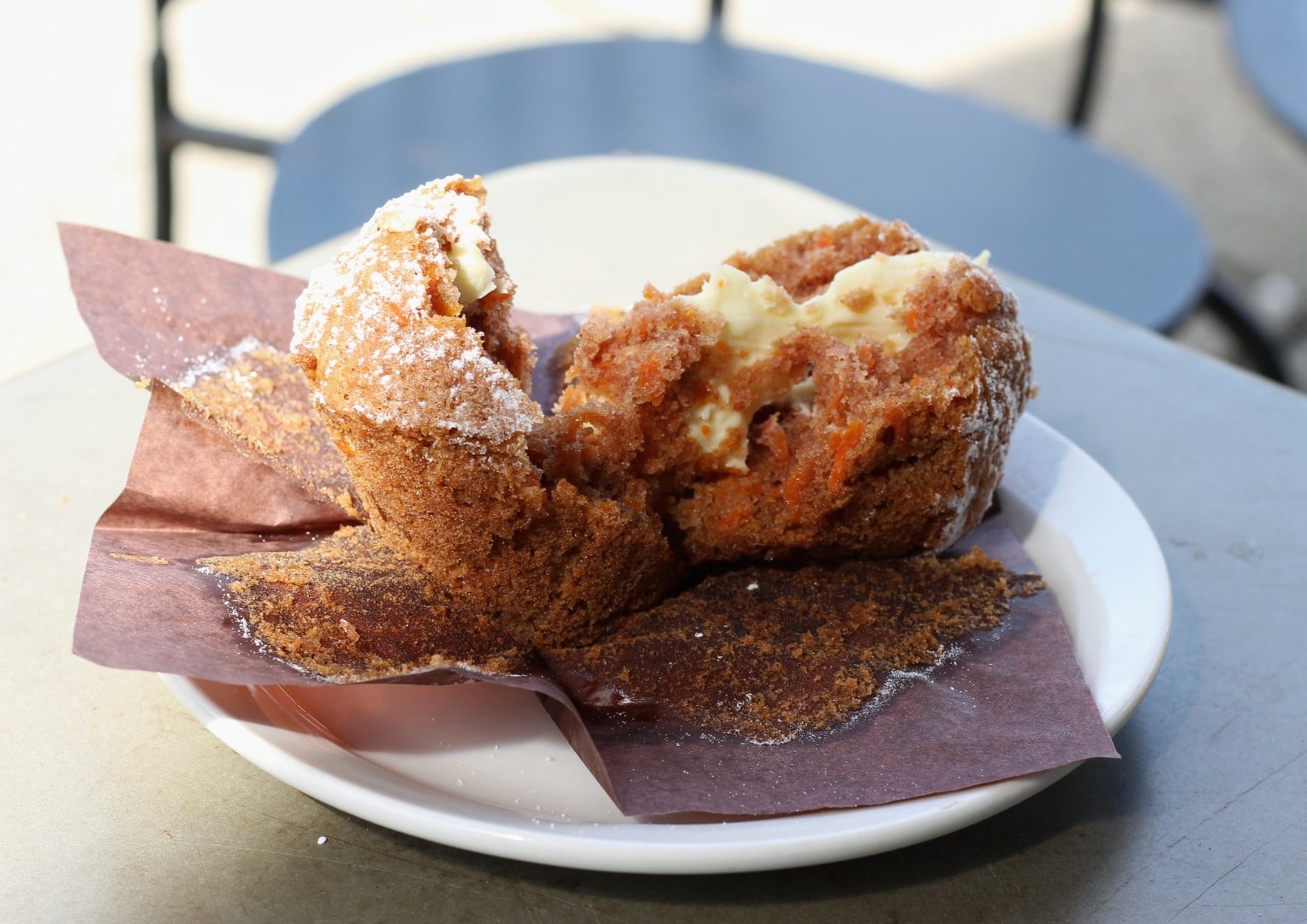 I’m a carrot cake fiend, so I was really hopeful for this particular item, but it was sadly pretty lackluster in flavour, despite the big carrrot chunks (which made it look awesome). The cream cheese filling was intensely sour, so I ended up scraping it out and leaving it. I’d love to tell you it complimented the coffee but the thing was still too f*cking hot to drink by the time I’d finished the cake.

Once upon a time Arbutus Coffee was probably quite nice. 40 years is a long time to wait for an update though. It’s in dire need of an overhaul. From the bar to the kitchen area, it’s all bruised, beaten and time worn. There are a sprinkling of tables as window benches, with some seating outside for the warmer months. But again, all of it needs an update…. much like their blog. It’s such a shame, because this place has so much potential to be a killer little local venue, if only they’d give it a boatload of TLC.

Location wise, Arbutus Coffee has one of the best spots for a coffee shop in all of Kitsilano. It’s in the heart of a residential area so the parking is plentiful (albeit hard to find free parking when it’s busy), there are buses that stop only a few blocks away on 4th and on Burrard, as well as being a prime location to always find Car2go or Evo vehicles.

Arbutus Coffee, why on earth is your toilet in the middle of the floor? Why it is not against the wall, like every other cafe in the world? Additionally, when was this used to film the latest SAW movie, because I thought I was going into the set of some sort of torture based horror film when I clambered upward (yes upward) through the awkward door. The bathroom was terribly designed, dirty, cold and a genuinely terrifying place to be. Luckily I escaped with 0% of my organs being harvested by knife wielding psychopaths.

I find the friendliness of the staff at Arbutus cafe to be very dependent on who serves you. My first order was placed with a bubbly blonde girl who laughed, joked and genuinely seemed to love being there. She was awesome; exactly how a barista should be. The second order was placed with a guy who seemed to think that my request of coffee cake was the biggest inconvenience that anyone has ever bestowed upon a barista. As he handed off my plate I was slightly concerned he was going to fall asleep whilst serving me.

Arbutus Coffee could be so many things. It could be kitschy, it could be quirky, it could be a local masterpiece or quite simply it could be cleaned. It’s got such potential to be the go to spot for a local, neighborhood coffee joint serving up high quality food and drinks, but it honestly feel like the owners have no interest in going that direction. I’d really only suggest this place if your furnace breaks and you want to heat your house with one of their cappuccinos.