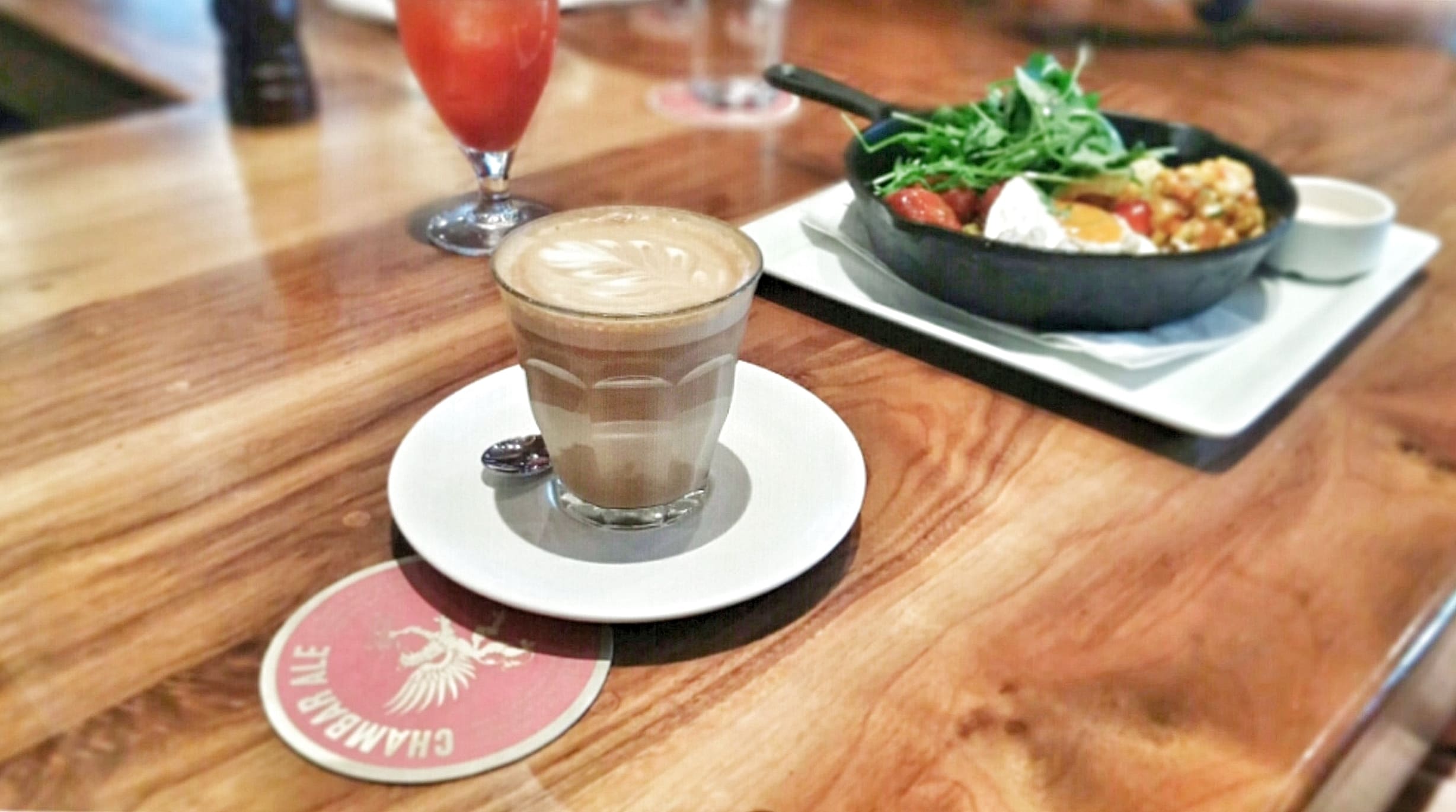 An absolutely spectacular selection of food, coffees and other delicacies, Chambar offers one of the best breakfasts in Vancouver, or an amazing place to eat dinner, if you’re out late. This is an absolute must for any weekend.

To add to the selling points, Chambar just picked up a huge amount of podium places in the Georgia Straight 2015 Golden Plates Awards, including the coveted “Best Restaurant Overall”.

10oz Lavender Latte – $4
Most people have heard that Cafe Medina is famous for their lavender lattes, so it’s not a surprise to learn that once upon a time Medina and Chambar were very closely linked. They’ve since split off in their own separate ways, but some of the old menu can be found at both places.
The Lavender latte is an example of that. Firstly the latte itself is a masterpiece; perfect espresso strength, luxuriously stretched milk and an ideal temperature. Many times I’d leave it at that and enjoy my drink, but Chambar offers various flavour additions, one of which is house made lavender syrup. The sweetness of this is not overbearing and it adds an amazing floral taste and aroma.
10oz Almond Milk London Fog – $4
Just like the latte, the milk (almond this time) was silky and luxurious. The sweetness was a tiny bit too much for me, but this was Mrs Vancouver Coffee Snobs’ drink, so that didn’t matter. Her verdict was that it was incredible.

Paella – $15
One of the best Paellas I’ve had in my entire life. It was a perfect blend of rice, sausage, seasoning, veg and all the other minute touches that make up a good Paella. The presentation was incredible – it was served in a cast iron pan, with a masterfully fried egg on top, garnished with arugula. If I had to make one criticism it’s the arugula – I seem to be the only person in Vancouver who doesn’t like that stuff… but that’s OK, I know how popular it is and I’ll not be deducting any points here.
Mushroom Omelette – $16
Mrs Vancouver Coffee Snob stepped up to the plate to try to polish this one off, and failed! It was too big for her, but she has the stature of a baby bird, so for most normal people it’ll be more than enough! The omelette itself was fluffy and light with a combination of flavours that worked really well with the mushrooms. The presentation wasn’t as flashy as the Paella, but it still looked great.

Chambar is on the doorstep of the Stadium-Chinatown Skytrain station so it’s very accessible. For those driving there are plenty of spaces to park on street and there’s a secret gem of a parking spot in Costco, just a short walk away ($2 for two hours). It’s located right between Yaletown and Gastown.

The Venue is beautifully designed, with exposed brick and ducting, as well as reclaimed wood. There is a vast array of seating inside and outside, but despite this you can still find a line up at peak times. If you want to wait until the crowd dies down just wander around the corner to Revolver for a coffee.

Again, beautifully designed, always impeccably clean and not a dust particle in sight! No complaints at all here.

Some of the best staff in any venue in the city, in my humble opinion. We sat at the bar and our server was friendly, chatty, hilariously funny and immediately “got” our group, throwing out as much sarcasm as we gave him. It’s a true sign of a great hospitality worker when you can immediately make a group feel at ease, even with some of the more risque jokes that popped up in our boozy breakfast (oh sorry, did I not mention the double Caesars!?). He guided us through all of our questions, made suggestions and even threw in a free dessert at the end of the breakfast. I honestly feel this was one of the best customer service experiences I’ve ever had and my entire group agreed.