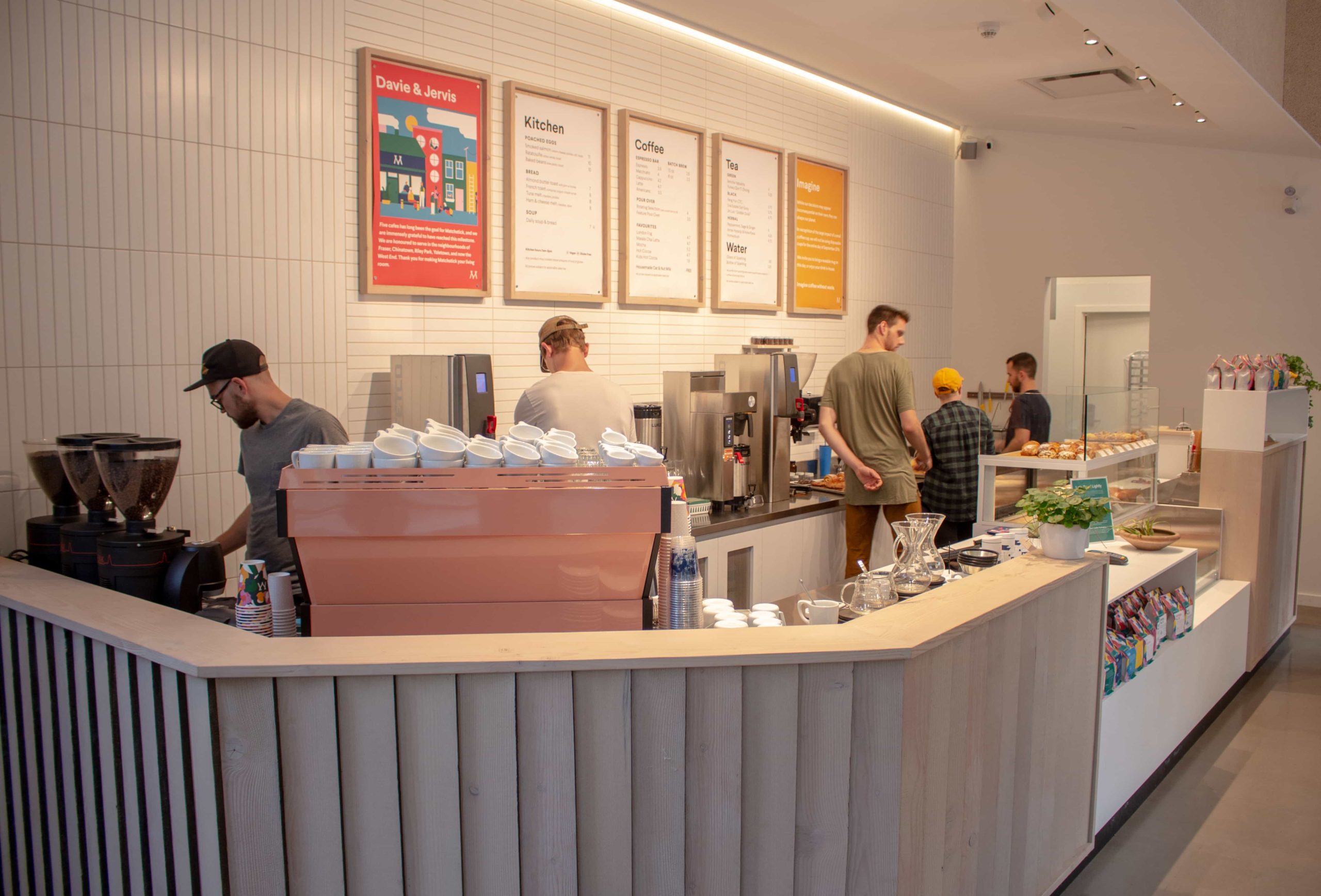 As I sat inside the new Matchstick in the West End, I realized two things. 1) I’m woefully under dressed for this part of town. 2) I’m woefully ugly compared to the average demographics at this end of town.

After all, this is the “gay district” of Vancouver (it’s actually the LGBTQ2+ district, but that doesn’t have the same ring to it). I’ve not felt this doughy since I reviewed Matchstick Yaletown last year.

Nevertheless! I toughened up, pulled up my elastic waist jeans, dusted off my White Asics, strapped on my golfing visor and hit Vancouver’s newest and sexiest Davie Street coffee shop. 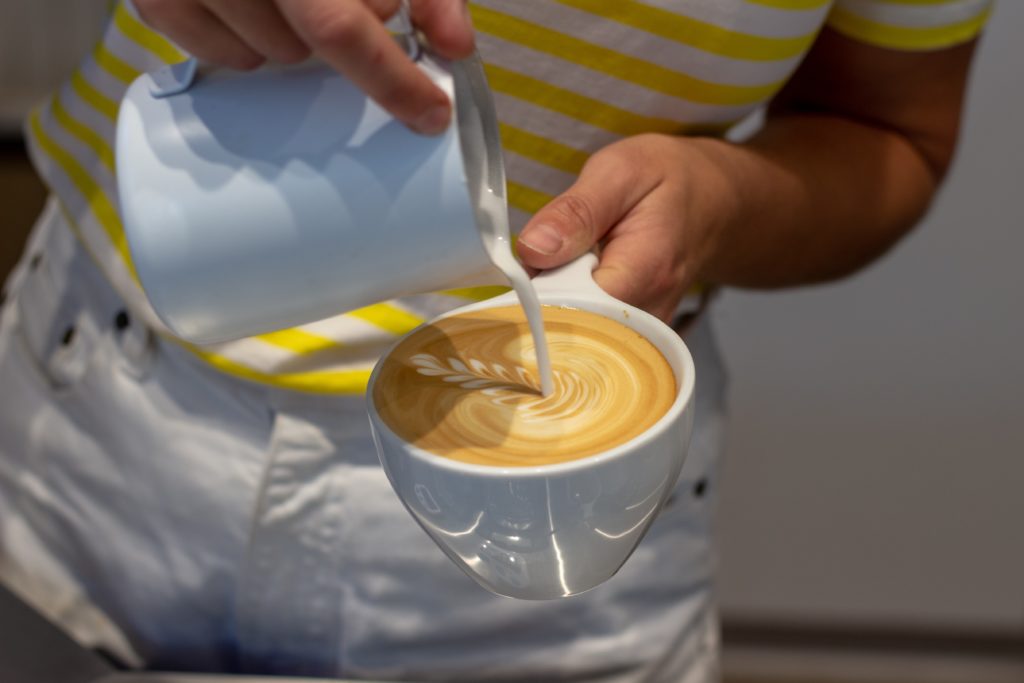 MASSIVE honeycomb taste right off the bat. Then a lingering chocolatey finish. It was genuinely like eating a Crunchie bar! The milk was expertly steamed by Isla, the wonderfully friendly barista who laughed and joked with me the whole time she was making it. The whole package was an absolutely bang on example of how to make a latte.

Right off the bat, this was one of the juiciest coffees I think I’ve ever had. Huge body and mouthfeel as well as a syrupy, sweet finish. As it cooled some citrus notes shone through with a teeny tiny bit of chocolate. Delicious.

The Oat and Nut milk is their own custom blend that they use for all their non-diary milks. I opted for the Eden espresso, which is a much more fruitier and lighter effort than their standard Bulldog espresso. The milk complemented the lighter notes of the coffee, adding a slight nutty rich sweetness. Really bloody great.

Side note – This espresso also makes a fantastic Americano that almost tasted like filter coffee!

The only bad side about drinking all of these is that my stupid “mmmm, delicious” face caught the eye of someone who was clearly some sort of supermodel. She looked at me with pity.

The review continues in a sec, but I wanted to quickly tell you about an app I’ve been working on for the last year that I’m pretty stoked about. It’s called Siply and the idea is to curate and promote the best coffee shops in Vancouver and then save you a little cash on your drinks. Have a play with the calculator below to see what I mean about savings. 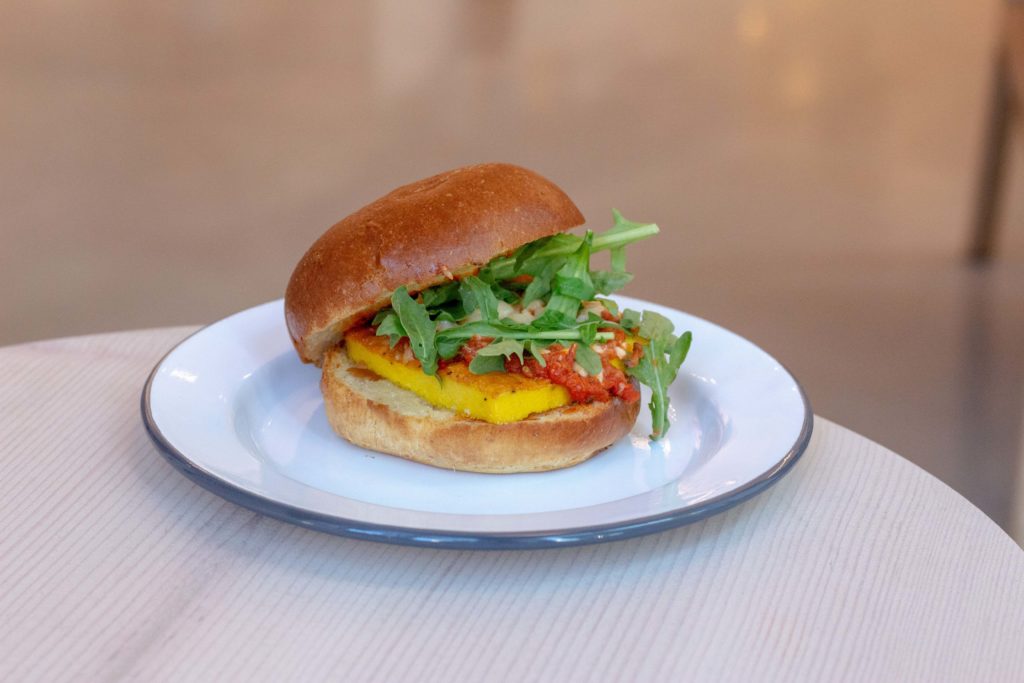 This lil beaut’ is made of a soft fluffy egg (not sure what they’ve done to it but it’s not like normal scrambled egg) with sweet tomato chutney, some cheese and arugula. It was all wrapped in a brioche bun. It was a solid example of a breakfast sando that isn’t trying to be too fancy. I personally could have done without the arugula because it’s the worst of all the leaves, but no points lost for that. This seemed to be a popular choice when I was there, as someone that looked like Ryan Reynolds ordered one shortly afterwards.

I could barely hold this thing, it was so gooey and chewy! Rich dark chocolate notes, with warm nutty Nutella flavours running through the thing. It was a great example of a cookie done right.

There’s loads of other food, treats and sweets to choose from.

I think I’d maybe taken half a step into Matchstick Davie before someone had welcomed me! It was the above barista, Isla. The rest of the staff were warm, welcoming and really seemed to be enjoying themselves. Each time they delivered one of my items to the bar they stuck around to say, “enjoy”, when I picked it up. A nice touch. 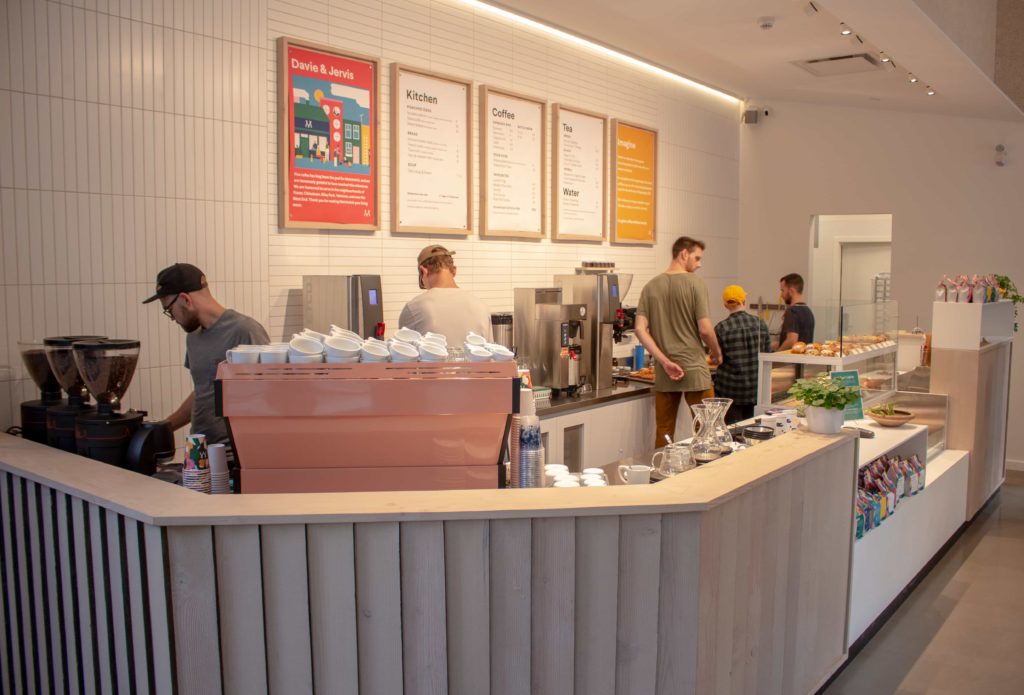 On my second visit, they recognized me and remembered my name! Damn impressive. Of course, they immediately got it wrong again when a guy called Tim ordered after me. But to be fair that probably would have happened to my mum too.

Overall I thought the staff were 100% incredible.

C’mon, you know what to expect here! It’s Matchstick after all. Beautiful Pantone shades with high-end furnishings. It’s another visual masterpiece. 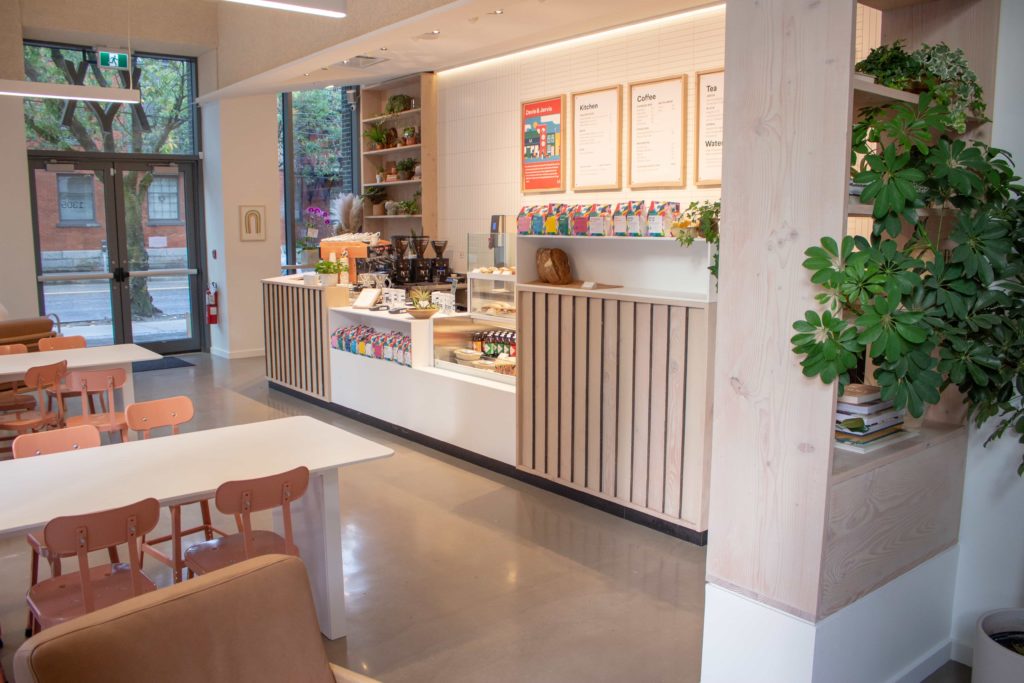 This particular venue is much smaller than a lot of their others (maybe all of them?). They’ve used the space really efficiently though. There are two communal tables. 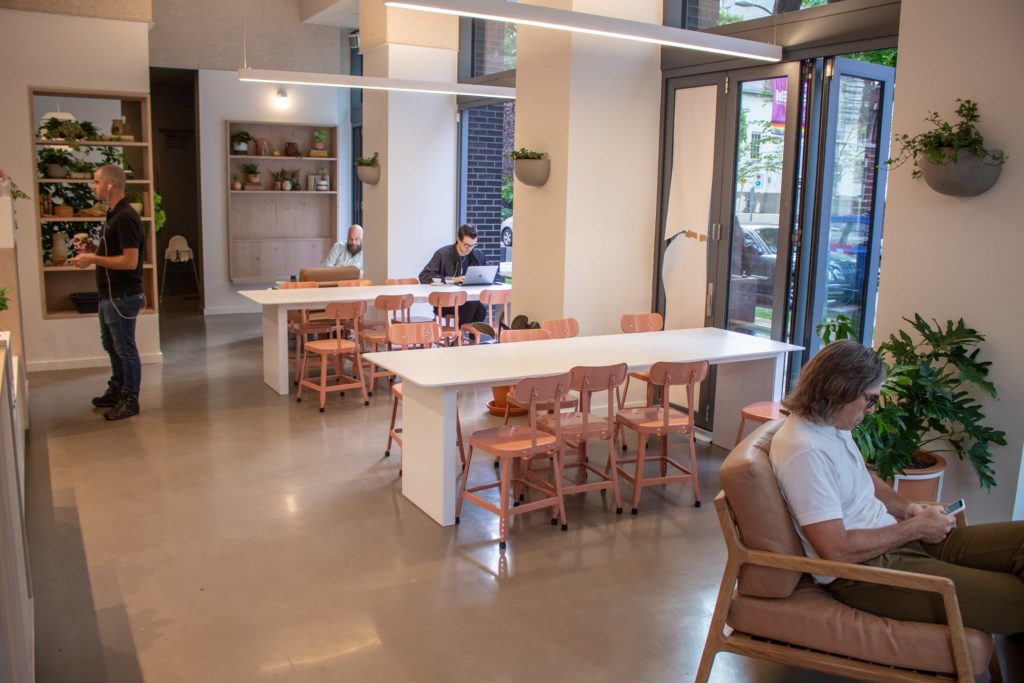 Then several nooks for quiet conversations. 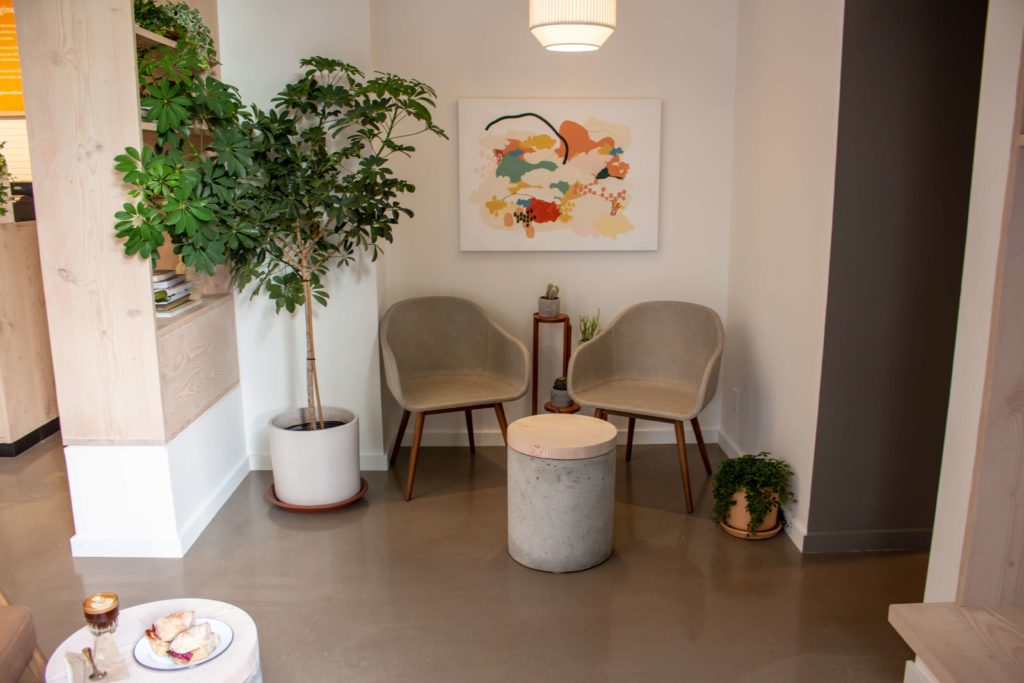 They have an outside patio, but at the time of writing, it wasn’t open. Once it is, there should be another 10-15 seats out there. This is accessible through huge accordion style doors that open the whole place up to feel like a huge room.

I’ve been saying for YEARS now that the west end deserves a swanky coffee shop. Sure, you have Greenhorn, Delaneys and Milano, but they edge towards darker roast coffee and you know how I feel about that. Surprisingly, Peaked Pies has a solid program, but it’s not really a coffee shop. 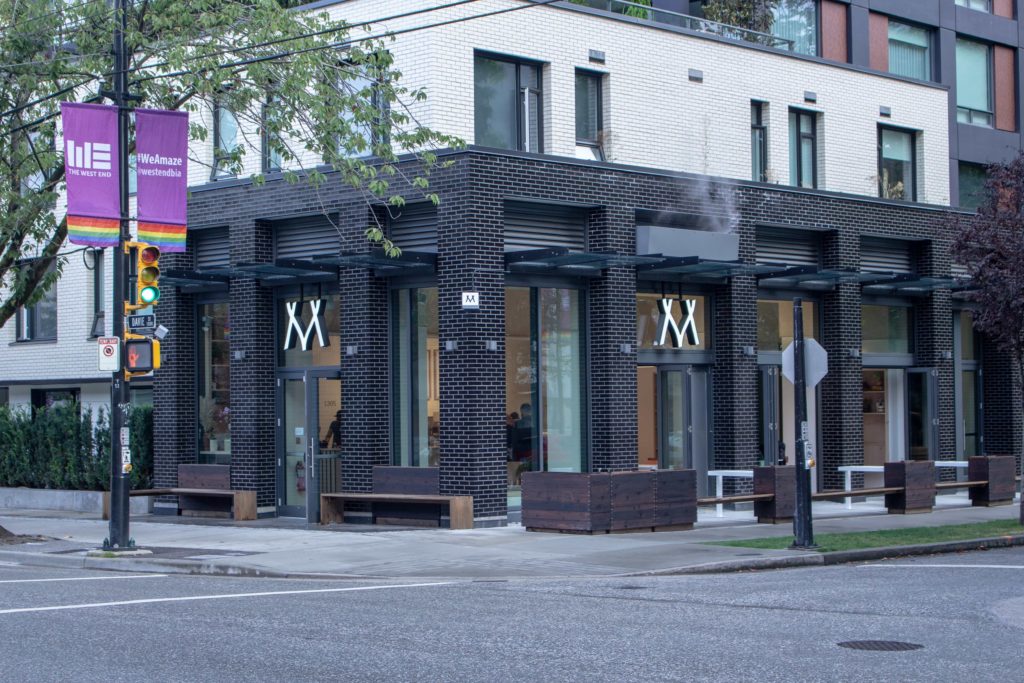 Anyway, the location is in the heart of the West End, in a brand new building. There are loads of on street paid parking around the area, plus some hidden free parking randomly dotted around. There’s a bus that stops close by but unfortunately no SkyTrain. Mobi bikes are everywhere.

Pros: There’s two of em, they’re immaculate and really beautiful inside. Oddly, the toilet has a speckle pattern to it. I only mention this because at a casual glance it looks dirty but in fact, it’s pristine enough to eat your dinner off. Don’t do that though, you weirdo.
Cons: It has mirrors and I was reminded how un-good-looking I still was.

Unsurprisingly the Matchstick crew have done it again. They’ve taken the usual beautiful aesthetic, thrown in their amazing quality staff and mixed in some great food and drinks for good measure.

They’re in a premium location, surrounded by some of the best looking people Vancouver has to offer. If you can take the ego hit, this should be on your list of coffee shops to visit this month.