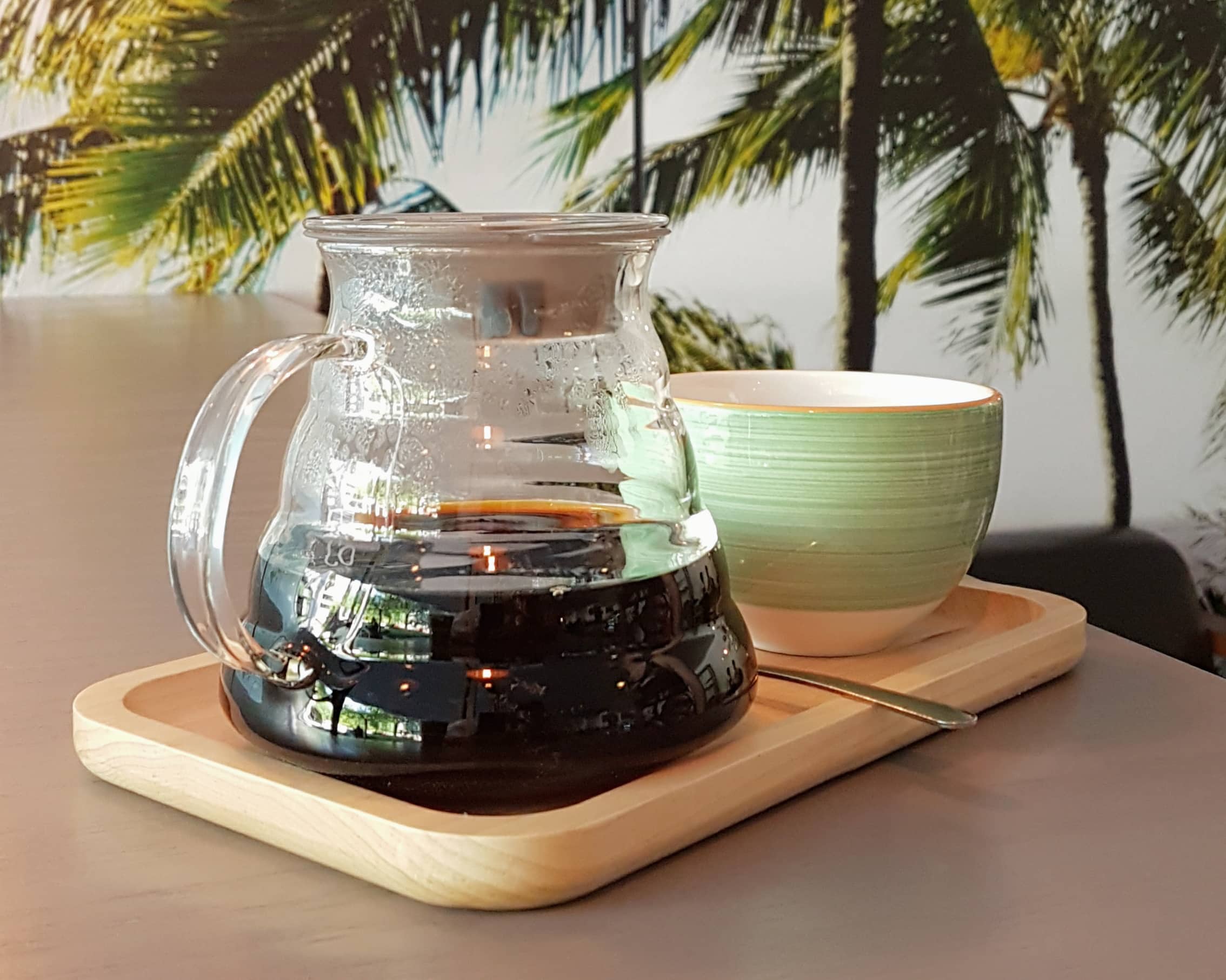 Honolulu Coffee is a stunning well designed coffee shop, with some nice friendly staff, let down by outrageously expensive and lackluster drinks, some questionable hygiene practices and little carpets around the toilets! CARPETS AROUND THE TOILETS!!! I was so excited for this coffee shop to open, but I can honestly say that I walked out of here annoyed that someone would have the gall to come to town to rip off my fellow Vancouverites. I recommend you go up the road to Burrard and have a coffee at the amazing Elysian instead.

100% Kona Coffee Pour Over – $6.95
Yes you read that correctly. $7 for a coffee. Want to have your mind melted a little bit more? If you want to buy a bag of this coffee it’ll cost you… wait for it… $90!
I know what you’re thinking; “it must be amazing coffee”. NOPE. Don’t get me wrong, it wasn’t bad. As far as Hawaiian coffee goes it was a solid cup, but there’s no way in hell that it was ever, in a million years worth almost the price of two cups from any other incredible coffee shop in town.
My advice is to stick to any other cafe and try their fanciest, most expensive, imported anything rather than this overpriced, quite frankly, insultingly expensive rip off. I mean it’s not like it was smuggled out of Yemen or something like that!

8oz Hawaiian Latte – $4.5
A Honolulu Coffee special, on paper this sounds like something really amazing; a latte made with coconut, macadamia, espresso, and milk. In reality I just paid $4.50 for a tiny Starbucks vanilla latte.

16oz Latte – $4.75
Finally something with a realistic price tag! Served in a paper cup (I’m not sure if they even have 16oz mugs, as I didn’t get the choice, even though I was staying in), I watched them pour one shot of espresso into it and top it up with 15oz of foamy, poorly steamed milk. The temperature was great though, so I guess that was something.

Ham and Gruyere Sandwich – $8
Not a bad effort here – the ham appeared to be proper sliced ham, rather than the processed variety. The cheese was tasty and there was a great wholegrain mustard addition. Overall the flavours blended well and I was happy by the end of it. In addition to this there was a side salad with a really excellent sweet, tropical tasting dressing.

Almond Croissant – $3.50
The flavour wasn’t bad but it was dry and overbaked. If you want a really good croissant head to Beacoup Bakery.

OK, onto the good stuff – the location is excellent. Honolulu Coffee is pretty central downtown and there are a million buses and parking spots in the area.

Easily the strongest part of the whole place, Honolulu Coffee is stunningly beautiful inside. The theme is white with some wood and teal colouring. They have one of the best looking Victoria Arduino espresso machines I’ve ever seen in my life and their pour over station looks like it can probably brew 6-10 coffees at a time!

Clean and well appointed, but all of this was let down by the fact that they have those little carpet things around the base of the toilet! You know, the kind your grandmother had… in the 80’s… and even then they were dated and unhygienic. I don’t get it, that’s a recipe for germs. But I barely noticed after what happened below…

The staff were friendly, polite and they seemed to be keen to chat, with plenty of knowledge of their offerings. They’d have likely scored high here, but they fell down in a colossal way when the employee putting frozen fruit into bags with gloves on, grabbed the bathroom key from me (after I’d used it), put it down on the counter and continued to touch the frozen fruit without changing gloves. In case that wasn’t clear, I took the bathroom key into the dirty bathroom, came out, handed the employee the key, who then touched the fruit that people were to eat. There is absolutely no excuse for this level of unhygienic work, Honolulu Coffee… even McDonalds can get this right.

After publishing this review I was contacted by the CEO of Honolulu Coffee who told me that all the tainted food in question was destroyed and new practices were put in place to ensure this doesn’t happen again. Great feedback to hear.